Magic vs Magik: The Mage 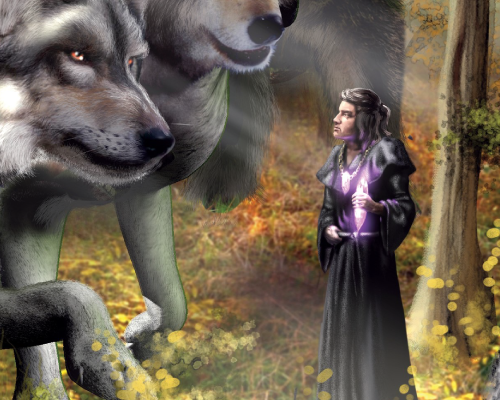 So what is this magik that Mage Alexio is able to call on? Where does it come from, what does it do, and how can you control it, and why does it vary so much in power?

First off, let us look at classical magic. In classical magic, mostly anything goes. The magic users with a few well chosen words and gestures can seemingly create anything out of thin air, be it fireball, arrows, shields, or even conjure a demon. As a retired engineer, I got a real problem with this. Moving large amounts of energy and in particular mass around at will violates several physical laws, like conservation of energy, conservation of mass, conservation of momentum (when moving) transfer of energy into mass and visa versa. In simple terms for the non-engineer: you cannot make something out of nothing. There is no free ride in nature. When you create or destroy mass you must pay for that in energy with the governing equation of E=Mc². I hope that at least looks familiar. Therefore to get a 125kg mass to appear or disappear, then somewhere there is a shift in energy just for the mass of 3.75 x 1018Joules. Never mind assembling that mass in a form you need. For those of you non-scientists, that is the force of about ten hydrogen bombs going off at once. This is why I have a problem with classical magic. But wait, you say. This is magic; it does not obey the laws of physics. Folks, everything we see obeys the laws of physics. Granted we have not nailed down all those laws yet, but everywhere mankind has poked his nose, this unsavory little fact arises. You do not get something for nothing.

Now what is magik. First off magik deals only in energy. It is a lot easier to move energy around than mass. Let us take Alexio’s massive fireball. One ton of TNT has the energy release about 4.18 x109 Joules or about nine orders of magnitude below what you need to create our 125kg demon out of thin air. I serious doubt if Alex creates anything that comes even close to this amount of energy to begin with. We still drop things like this as bombs from airplanes almost every day. Therefore we are working with high, but not ridiculously high amounts of energy.

Where Does it Come From?

But where does this energy come from? Here is where I admit I go off the beaten path a bit. From Super Spring theory we think, we live in a universe of many more than the four dimensions we can perceive. Many also think we live in a multi-verse with multiple universes existing simultaneously in their own dimensions. In our world of magik, there are rare individuals, maybe one in a thousand, that have the ability not only to feel things with their mind, but also see these varied universes (called realms in our book) that surround us. Some of these universes exist in a higher energy state than the one Alexio lives in, and other universes exist in a lower energy states. The mage has the ability to see these realms and take energy from them, or give energy to them. That energy can be used to create certain forces within nature like wind, fire, lightning, and force that can be used for a variety of tasks. That energy can also be used, with highly specified training, to assist the healing of living bodies. I freely admit this is pure speculation on my part and I do not have a hint that this can actually happen. However, you have to grant the writer some license to play around in the garden of physics or you will never have authors like Verne, Wells, Heinlein, Asimov or Clarke and their stories this writer look inspiration from.

Crystals and Other Aids

Now what about these crystals? Again this is speculation on my part. The crystals act as resonators and amplifiers that take the mage’s natural abilities and focus them so they can obtain a greater effect than if he did not have these aids. Other things that affect the power of a mage are the natural ability to the mage to concentrate, the strength of the barriers between the realms in a given place, and the stress the mage is under. These can all effect how powerful he can be. In Alexio’s case we have a person with a very high natural talent combined with crystals to create magik that scares even him. One of the points of this story is what he does with this power. Someone once said, ‘With Great Power Comes Great Responsibility.’ How a person uses this power is a major theme in this story.

I hope I have explained this thing called magik better. In any case, that is my story and I am sticking with it.

“I know one thing, that I know nothing.” – Socrates