Why an Ancient Greek Fantasy? 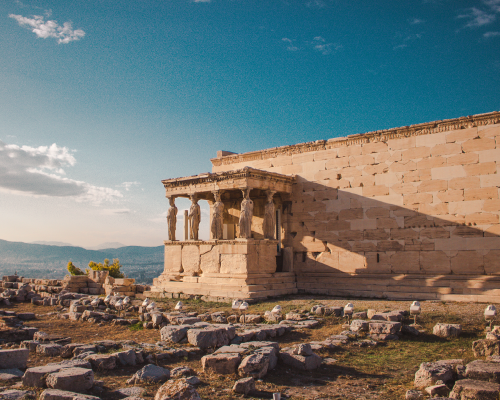 Why in the world do you want to write an Ancient Greek Fantasy novel set in a world most of us know little or nothing about? Well, there are several reasons why. First and foremost, it is really unexplored territory. Most Greek fantasy up to this time has been in the mythical age with Gods and ancient heroes like Achilles, Hector, Hercules, Jason and Perseus, There were all mighty Greek warriors whose claim to fame is beating the snot out of monsters and their enemies. The Greek Gods were also very important in guiding their adventures and taking part in the conflicts. If you like big brutes in bronze jockstraps, carrying big swords that they were more than eager to use, such a world is perfect.

There was another world and it is a world that very much affects civilization up to this day. The Greeks were really the first group of people that we have any real knowledge of that praised the individual and his efforts. In earlier kingdoms you hear about the efforts of mighty kings, but not much else. In the Greek world you hear about real people doing real things. The Greeks also believed in competition. The hero was the person (mostly men I admit) that competed against others. It was in this arena that the Greek thrived, and if victorious, rewarded. Not so much with money, but with praise and personal reputation that would carry on beyond the individual’s life. To have your name remembered down the ages was the only true immortality a Greek could ever expect. The arenas were not just athletics like the Olympic Games (one of many pan-Hellenic competitions), but in warfare, politics, and funding great works for the demos (people).

The Greeks also introduced us to many of our modern areas of study. They started the sciences, especially mathematics, geography, and natural philosophy. The study of history, not just for praising your leader, but for the sake of understanding why things happen and what can we learn from it, has its start in Greece. Our systems of democratic governments have their origins in the city-states of Greece. The very idea that man is a creature that lives in a city and under the rule of law has its very start in Greece. Law courts, and the idea that the individual can only be judge by his peers rather than a pronouncement by a ruler, begins here. We owe the Greeks for the very institutions we acquaint with western civilization.

It is in these areas where literature has not spent much time in Greece, and it is to these areas I want to dwell. I do not want to make my books sound like history lectures. Instead I want you to view the ancient Greek society through the eyes, beliefs, and adventures of someone who is not built like Hercules, or can fight like Achilles, but someone with other abilities. I want you to view this society as daily life to one whose existence is spent traveling through it. There are great strengths, and great weaknesses in this world, and I want you understand both. There is also a lot of pure, unadulterated pragmatism that mostly won out during conflicts even in Greece. I can only hope my abilities as a Greek fantasy writer can match my appreciation of this world and the people that put us on the path to who we are today.

For those of you who like more information on Ancient Greece, The Great Courses has many audio and DVD courses. The can be found at https://www.thegreatcourses.com/

For those of  you more interested in knowing what life was as a citizen in ancient Greek, see my blog spot: