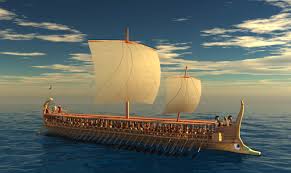 In Ancient Greece, the reputation of the hoplite was well known throughout the world. However, this is not where the Greeks had their most lasting effect on the ancient world. Above all else, the Ancient Greeks were sailors. In the time before the Classical Period (500-300 B.C.E.), the Greeks had colonized much of the area around the Middle (Mediterranean) Sea extending from Spain to Southern Russia. Their only serious rivals were the Phoenicians.  Their trading networks also spanned the entire Middle Sea. You could buy goods made in Egypt and have them as household wares in Neopolis, or modern Naples. The Greeks defended their trade routes with one of the best navies of the ancient world. The backbone of that navy was the Trierse; known in Latin as a Trireme.

What is a Trireme?

Triremes were long thin ships that had a variety of designs depending on the age and government that built them. They had three banks of oars on both sides. Several years ago, two Triremes were built as replicas of ancient ships. The Olympias was 120 feet long(36.8m), 18 feet wide(3.6m), and had a displacement of around 42 tons. The Trireme had sails for longer voyages. Under oars only, it could travel between 7 to 10 knots but only for short periods of time. Under sail and oars, the speed could be about 8.5 knots. You never went into battle with your sails up however. In each ship there were about 170 unarmed rowers, 10 deck crew, and about 20 armed men that acted like marines for a total crew of 200. Despite what you see on TV or in the movies, the rowers were not slaves, but free men. In Athens, they were taken from the poorer classes who could not afford hoplite armor. As a rower in the fleet, you served with your neighbors and even your family members. There was great cohesion in these rowing crews you would never find in a slave powered ship. Men were proud to serve in the Navy. This service allowed the poorer classes to serve the state and made them full voting citizens in the Athenian Assembly. With a navy of 200 ships, each with 170 rowers each, that allowed at least 34,000 poorer citizens to have their say in government. It has been suggested by some historians that the advent of a fleet fostered the ability of poorer citizen to take part in government. This made the Athenian democracy even more inclusive of its citizens.

War at Sea and Athens

The main weapon of the Trireme was the large bronze ram under the front of the ship. The trick was to maneuver your ship under oars and ram your enemy (preferably in the middle of their ship). That would tear open a hole in the ship allowing water in to flood it and put it out of action. Another technique would be to run close to the side of an enemy ship breaking off all the oars on one side and immobilizing it for later capture or destruction. Not the entire Trireme sank if rammed. The light woods they were made of were naturally buoyant. They would burn, and did on several occasions. If you went over the side in combat or by accident, unless you could grab something floating, your survival prospects were dim unless picked up by another friendly ship. Otherwise you drowned or because a slave of your enemy. Combat at sea was a brutal affair where quarter could seldom be offered.

Using these tactics, Athens fairly much ruled the Aegean Sea and even along the coasts of the Persian Empire (from 450 to 404 B.C.E.). This became one of the greatest Naval based empires of history. More important that this were the trade opportunities this mastery of the sea allowed Athens. The polis became rich, not just from trade, but from tribute other members of the Athenian Empire contributed, either voluntarily or coerced. This allowed the Golden Age in Athens that saw the dawning of democratic government as well as, philosophy, formal science, literature and the university. However, keep in mind that while Athens was reaching the pinnacles of influence, culture, and power, it did so by running one of the most lucrative protections rackets in history.

As the ancient period continued, larger and more powerful ships became available. In Rome ships of 4 and 5 banks of oars were known. In the Helenistic Period, there are reports of ships with 16 banks of oars. On report tells of the Leontifera, a ship with 1600 oarsmen and 1200 marines. The biggest ship I have read about was over 420 feet long (130m) and had a total crew of 7250 rowers, deck crew and marines. Frankly, I find these numbers difficult to believe for the simple reason of how do you store provisions, especially water, for a crew this size for several days? The crew of this last ship is the size of the crew on a modern aircraft carrier.

For more information as well as detailed diagrams, I recommend Ancient Greek Warship 300-322 BC by Nic Fields and Illustrated by Peter Bull. It is available through Osprey Publishing:

More about Greek government in my blog on ancient governments:

Subcribe to get Updates

Thank you for subscribing! Check for a welcome email in your inbox.

We use cookies to ensure that we give you the best experience on our website. If you continue to use this site we will assume that you are happy with it.OkNoPrivacy policy