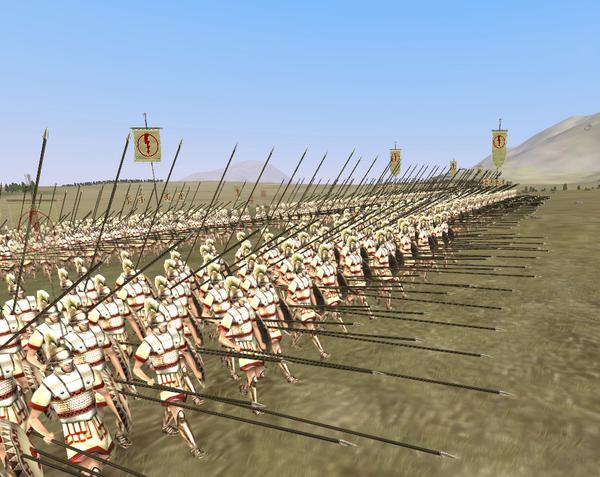 Following the end of the Peloponnesian War came the rise of Philip II of Macedon and his son Alexander the Great. With them came a great change in Greek Warfare. Gone were the lines of heavy hoplites and in its place a new formation arose, the Macedonian Phalanx. (See Figure 1) Historically, it is an invention attributed to Philip II. In the phalanx you take the order and concentrated might of a hoplite formation and combine with a weapon designed to keep the enemy at distance. That weapon was the sarissa. It was a long sphere: 13-20 feet long (4-6 meters). It weighed between 14-16 pounds (around 6 kilograms). The front had an iron spear point at the head, and the back a bronze butt spike. The heavy butt spike helped balanced the weapon and was useful for planting the spear firmly in the ground. It could also be used to finish off any enemy solider on the ground. For ease of carry, the weapons broke down into two pieces that could be rapidly assembled.

What is a Phalanx

A typical phalanx formation consisted of men marching in a square or rectangular formation, The number of men varied, but the most popular number I have found is 256 (16 rows of 16 men each). The first three or four rows could extend their iron spearheads beyond the front of the formation giving the approaching unit the appearance of a forest of spear tips coming directly toward you. (See Figure 2) This was extremely upsetting to the men on the defensive. The other men in the phalanx formation angled their spears forward over the heads of the men in front of them. This mass of  sarissa then became a partial shield to protect the formation against plunging arrow fire. Most of the armies at this period were using shorter range infantry weapons (swords, and shorter spears). Therefore, attacking a Macedonian Phalanx from the front was like trying to grab a porcupine with your bare hands, i.e. close to suicide. Fairly much anything in front of the unit got run over. The formation proved superior in Greek Warfare. As an example, Alexander too the phalanx and with good heavy cavalary took out the Persian Empire even though outnumbered over 10: 1. In brief, nothing stood in the way of a phalanx on the move for a century.

How Did It Work

What held the phalanx together was strict discipline. You had to coordinate your actions with your other 255 friends in the formation, otherwise it be chaos. Being able to march lock step with your fellows in the formation was absolutely necessary. Imagine what would happen if 256 people carrying 16 foot poles moved randomly. This is why it took constant practice to be able to execute battlefields maneuvers. Philip II drilled his men for years until they could literally fight in their sleep. It was a training regiment also adopted by the Romans and even by today’s military forces. “Fight as you train; train as you fight!’ The other thing was that you had to trust your life to every other man in the phalanx. All it takes is one man stepping out of formation to start a cascade of destruction. Comradeship in these formations had to be close.

Fall of the Phalanx

When properly used, a phalanx ruled the world of Greek Warfare for over one hundred years only yielding to the Manipular Phalanx of the Roman Army at the battle of Cynoscephalae in 197 B.C.E. One problem was the phalanx did not maneuver well except on open and nearly flat terrain. Try thinking about taking 250 men with 16-foort sticks through a forest, or up a mountain to understand what would happen.  The main problem with the Macedonian Phalanx was that it had all of its power to the front. It was open to attack on the flanks and rear. If you could get in close, then the individual member of the unit (phalangites) had only a short sword, light shield and limited armor to protect himself. Also, each phalangite had to use both hands to work the sarissa, In order to fight with a sword, you had to drop a 16 foot spears on your fellow phalangites and turn and face your enemy. That was a problem common to all long spear formation until the Swiss pike formations of the 14th and 15th centuries. They developed the Hedgehog maneuver. Here the pikes would radiate out in all directions from the body of the formation.

It is interesting to note the change in Greek Warfare and fighting techniques over the ages. In the Bronze age (1200 B.C.E.) it was individual combat for personal glory and reputation. In the Classical age (500-400 B.C.E.), it was the hoplite formation, and the trust you put in your neighbors who fought with you. Then in the Hellenistic period (350-150 B.C.E.) it was the phalanx where you were a part of a large fighting machine. It is an interesting evolution of tactics by some of the most innovative people of all times, The Greeks.

For those of you who would like more details, the Osprey Publishing Company has an entire illustrated series on ancient warfare. They can be reach as the URL listed below