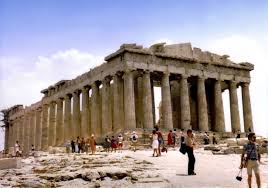 A guest blog from our friends at The Athens Insiders Team. Their webpage is located at

Restoring the masterpiece of Classical Greece.

While the ancient Athenians built the Parthenon in a surprisingly short period of approximately nine years, the modern repair project has required four time as much time already and is nowhere near completion. The process of consolidating the ancient masterpiece of Greek architecture appears to raise much more troubling problems than the initial construction did.

During the past 2,500 years, the Parthenon – the most iconic monument of ancient Greek architecture – has suffered mightily. Built in the mid-5th century BCE, as part of Perikles construction program on the Acropolis hill, and having served the cult of Athena for about 1000 years, the Parthenon remained the centre of the city’s religious life for another millennium, existing as a church under the Orthodox Byzantines and later the Catholic Westerners. With the Ottoman conquest in 1458, it became a mosque, once again preserving its importance as a place of worship. Although it had been rocked by earthquakes, burst into flames, reshaped by man-made interventions, Parthenon’s major damage was the result of the terrible gunpowder explosion of 1687, an incidental event of the Siege of Athens by the Venetian forces during the Sixth Ottoman-Venetian War. Henceforth, the edifice lost its structural integrity, transformed into its current ruinous state and began being looted for its remaining architectural sculpture over the next centuries.

During the 19th and 20th centuries, the utter admiration for ancient Greece became the cause for the systematic destruction of all medieval and post-medieval structures on the Acropolis, losing instrumental data in shaping the diachronic history of the monuments and of the hill. Rightly or wrongly, the first restoration works at the Parthenon and its preservation at the site focused on the original edifice of the “periklean era”. Nevertheless, a major problem lies elsewhere.

The early 20th century intervention of Nikolaos Balanos (a civil engineer trained in Paris) was distinguished by its extreme invasive methodology – an aftereffect of Balanos’ carrier on contemporary construction techniques and of the difficult financial conditions of the day. Serious damage was caused by the use of iron reinforcements and clams within the ancient marble blocks (industrial iron is very sensitive to rusting and with minimal resistance to moist weather conditions) and by the use of cement fillings for the columns; an easy, practical and inexpensive choice. Moreover, the misplacement of column drums and marble blocks in order to resolve the building’s static problems, without thought identifying and restoring the ancient members to their original position (a key principle of a restoration process, already proposed by that time by French and American archaeologists), created a negative sequel and the necessity for a new study and approach.

The current restoration project funded by the EU and the Greek state is now entering its 45th year, as an inter-scientific Committee of experts (archaeologists, architects, civil engineers and craftsmen) endeavour to consolidate and preserve the character of the structure and not to rebuilt the monument. To do so, they had at first to understand in detail the ancient techniques and to repair the old and erroneously restored sections with new materials of improved quality. Using advanced technology both in research and in execution, several hundreds of marble blocks and columns drums have been dismantled, restored and reassembled in their original position. The rusted elements of the previous restoration were removed and replaced by white cement and titanium reinforcements. Where necessary, missing parts have been added in new Pentelic marble, which is of the same provenance and quality of the original. Likewise, various sorts of damage caused by the course of time and the atmospheric pollution have been solved successfully (sugaring, disintegration, cracks, fractures and bio- deterioration).

In the years between 2001-2014 the entire north colonnade of the temple has been restored. The original column drums have been reset in their right position and new additions were completed, including the extremely difficult processing of the surface of the new drums; a practice that involves the carving of curves and flutes and requires highly skilled expertise. Since 2017, the repair works were focused on the inner wall, the west side and the cella (namely the sacred inner room of the temple). Hence, the famous “Parthenon’s crane” was transferred inside the building.

In spite of the presence of scaffoldings and of modern machinery, which are indeed integral components of Parthenon’s current image, the visitors can finally contemplate one of the most complete views of the temple, both in its structural and aesthetic entirety. Because of the size, the weight and the perfection of the ancient structure, as well as of the absence of ancient architectural manuals that they could arguably assist modern scholars and artisans, the restoration of the Parthenon is an immense challenge.

Today, after the best part of five decades of research and restoration following new approaches that respect the original structure and materials, we can surely state that we know much more about the Parthenon itself, its construction details and its historicity. Even if “we are still very much in the middle of things”, as Parthenon’s expert scholars claim, this is truly extraordinary!